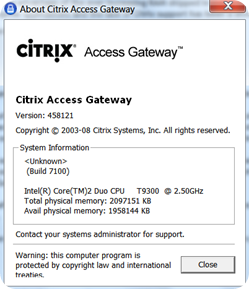 While many are migrating toward the new Windows 7 and jumping to 64 bit to take advantage of the ever increasing RAM shipped in today’s laptops, frustration has been high with the lack of a 64 Bit CAG client.  Many rely on the CAG to get to their enterprise applications and the lack of Citrix support has been a show stopper for some.

Paul Fingleton of Citrix gives an update on the forums on the status of the client.

I would just like to take this opportunity to reassure you all that development of a 64-bit Windows client is progressing and at a very advanced stage.

As mentioned earlier in this thread by Jay Tomlin, we realize that news of the pending client release for x64 is coming later than many of you had hoped for. Unfortunately the effort to support 64-bit platforms was larger than expected, and required some fundamental changes to the client architecture that were not trivial to implement. The 64-bit plug-in will be available as soon as we can – it’s one of our highest priorities and most requested features at this time.

While we do not have a specific release date that can be communicated externally at this point (there is an internal date that we are working towards, as you may appreciate such dates may be subject to some small changes depending on results of final testing as the date comes closer), the support for x64-Windows clients is expected to be included in the forthcoming 4.6.1 release of the Access Gateway Standard Edition software.

Also from Jay’s comments "We also intend to support Windows 7 shortly after it becomes (generally) available from Microsoft.". Windows 7 support for the Access Gateway Plugin is expected to be included in the 4.6.1 software update.

Hopefully that helps to answer some queries, and apologies for any undue concern that may have been caused as updates had not been posted to this thread.

The 64 bit support will be great and I can tell that the community is eagerly awaiting it.  I am personally running 4.5.8 without issue on my 32 Bit Windows 7 laptop.