I recently had to find some support documentation for a colleague that verified if Microsoft Exchange 2010 Server running on Microsoft Windows 2008 R2 server would be a supported configuration on a VMware vSphere infrastructure.  Seemed like a pretty quick query but I really had trouble finding any official documentation on the subject.  Partly because of the upcoming VMware Partner Exchange 2010 conference (which is currently monopolizing the Google ‘Exchange 2010 VMware Support’ queries) but also because of the difficulty in creating a matrix that encompasses all the different applications and flavors of Operating systems.

Microsoft does have an official certification program called the Server Virtualization Validation Program (SVVP) that I found very useful in figuring out what types of combinations are valid under which support agreements.  They also provide a great support Wizard that allows you to choose the product, OS and Virtualization platform and see if it is officially supported by Microsoft. 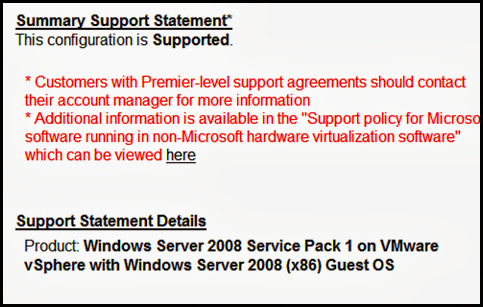 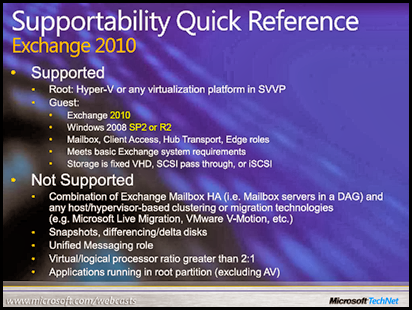 In my particular case, I could only verify that Windows 2008 was a supported OS under vSphere.  Unfortunately Exchange 2010 is not on the SVVP wizard list yet.

I did manage to find a Webcast on TechNet that stated Exchange 2010 is supported on any Virtualization Platform in SVVP (Which includes VMware vSphere) and a Guest of Windows 2008 SP2 or R2.  Check out the WebCast and the PDF.

It also clearly states that MS will not support VMs with Snapshots or participating in vMotion (Although I am not sure how they could tell that it’s been vMotion’d unless the error occurs DURING vMotion).