Separate Virtual Disks for each volume in Virtual Machines. 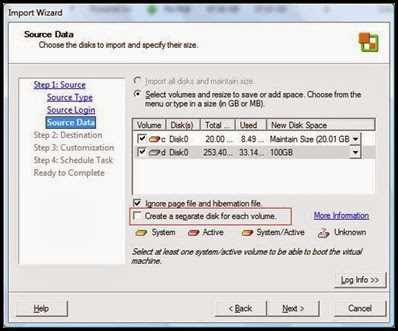 It’s a pretty solid best practice to create a separate virtual disk or VMDK/VHD for each volume in a virtual machine.  The alternative is to create 1 vDisk and then partition the drives within it.   Single volumes per virtual hard drive allow for much easier management in my opinion.  Growing, shrinking and otherwise manipulating a single volume when it is 100% of the virtual disk becomes a trivial thing with most hypervisors.  Situations where a single virtual disk is partitioned to multiple volumes and manipulating the first partition on the disk, becomes an exercise in data block juggling.  Sometimes preventing the operation from occurring at all.  Of course for new VMs, I still tend to favor a single partition approach but when multiple partitions are in play, separate virtual disks are the way to go.

From within the Windows’ Disk Manager/Administrator, multiple VMDK/VHDs will just look like separate Hard Disks within the Operating System.  Hopefully, these Virtual Disks will also be located on a SAN storage LUN somewhere! 🙂