Giving Voice to the Smart Home

Voice is awesome in a home automation context!  Whether it is Voice control, voice notifications or even just music; I love it.  I believe it really adds something to the overall feel of the system.  It gives it a distinct personality.  In my own personal setup, I have quite a few instances of speech and sound throughout the day coming from the house.  It is also the primary way we override automations (i.e. Lighting controls).  Voice control is MOSTLY 1 set up using Alexa devices all over the house. (Dots, Echo and my new Tap!)  Using the Emulated Hue component, Alexa is able to control all of my lights, switches and other devices configured in Home Assistant.

The home is also able to talk back to us to give us a variety of notifications.  With the new security system in place, I have a wealth of sensor data in HA so I am able to allow the house to speak to us when a window or door is left open for extended amounts of time or past certain hours.   It is incredibly useful and personal which makes the home seem even smarter than it really is.   Since we are primarily an Amazon Voice household, I have configured Home Assistant to use the Amazon Polly service to give the voice experience a very fluid feel.  A member of the household can say “Alexa, turn on Home Stats”, Alexa will respond “Ok” and then the Amazon Polly service (Joanna) will respond over the speakers with a run down of inside temps, lights on and a list of open windows or doors.  Even though different systems are working behind the scenes together, the User Experience is that of one voice from the house.

I’ve built a pretty complex (at first glance) speech engine and processing script in yaml/Jinja to craft dynamic sentences and random phrases to give the system added personality.  The centralization of the scripts also allows me to easily update the base of language and vocabulary used in various automations.

One of the things that really drove me nuts was the music aspect of the system.  When I played music over the whole home audio system, the HA Notifications were crowded out.  It was too difficult to figure out a way to pause the music, play a notification and then resume.  And I had no way of mixing them both in and over each other.  Then I spoke with Dale!  He clued me in to a very inexpensive Mixer that he had been using in his system for a while.  This mixer was about 50 bucks and allowed up to 4 channels to be mixed in and played through my AMP (another very inexpensive item).  The result was the ability to play music throughout the house while having HA notifications and Alexa responses mixed in.  Even the fake Cuckoo Clock automations would play over the music every 30 minutes.  The whole system works great!

Here is the part list I used if you want to create a similar set up in your home with Home Assistant.

I also had in-ceiling speakers already run throughout the house that I connected the AMP to.  The configuration is Chrome Cast Audios and DOT connected to the Mixer connected to the AMP connected to the Whole House Audio.  Depending on your situation, you could also use the separate CCAs to play different things (stream music(No longer available) to one via HA and have the other just do HA notifications 2 – Both connected to the mixer (up to 4 inputs).

I’m also hoping to add additional voice to the house via the new Fire Tablets.  The Floorplan project is developing the ability to use the tablets as a Media Player that will be capable of being a TTS target.  This will help increase coverage in the house for various alerts and notifications.

Hope this was helpful to help understand my particular set up using voice, music and  notifications in my Smart Home.

1. I do on occasion use the iPhones and Homekit for a quick Voice override.

2 A typical voice notification can be seen on the bottom of my tablet interface.  This message was spoken over the whole house audio system in a voice VERY similar to Alexa giving a unique cohesive feel to the Virtual Assistant’s presence in the house. 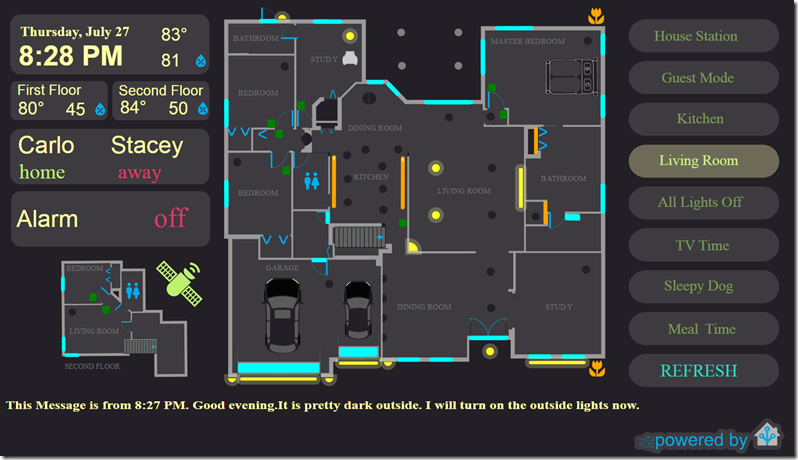