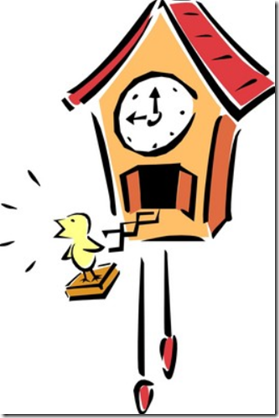 If you have read about my Smart Home before, you know that I have speakers wired into most of the house for a Multi-Room audio experience.  I use Chrome Cast Audios to play Text to Speech notifications throughout the house from Home Assistant.  The voice is affectionately called Joanna (The Amazon Polly Voice).

A while back I read about a pretty cool project from Hareesh M U where he created a Grandfather Clock chime for his house using Home Assistant.   There were also some Cuckoo Clock files in the thread so I decided to build a digital Cuckoo Clock for the house.

I’ll assume you have your Home Assistant server set up and your Chrome Cast audio connected to some sort of speaker system.

The Cuckoo Clock automation is located on my Repo here : https://github.com/CCOSTAN/Home-AssistantConfig/blob/master/automation/System/CucKoo_Clock.yaml 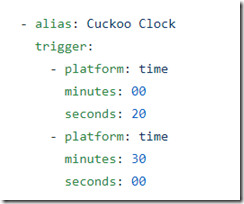 The automation fires every hour on the hour (Squawking once for each hour) and then once for the half hour.   The conditions around this automation are that we are home and it’s between 9:30am and 9:30pm.

I have all the Cuckoo sounds on my GitHub repo and you can either download them or continue to pull them from my repo.   Both will work fine.

This automation is pretty self contained and works really nice.  You will have to adjust the media player options to point to your particular Chrome Cast of course.

You might have noticed in the parts list, a Fire Tablet.  I have worked with Petar Kozul to add Media Player support to the Floorplan installs running on the Fire Tablets.   This allows notifications and sounds like the clock to be  easily distributed throughout the house with tablet mounts.

Here is a quick video on the Fire Tablet in action.  I forced the Cuckoo automation to go off manually which is why the time says 12:55.

BTW: If you haven’t checked out the new Floorplan, it now includes :

If you need some inspiration for the Floorplan install, check out my past blog post. Visualizing the Smart Home