Looks like March could be a busy month for Corporate Help Desks! There is the EdgeSight bug and now a potential Google issue for users still stuck on Internet Explorer 6.  The post below goes on to say that first Google Docs and Sites will suffer from loss of features as Google begins to phase out support for Internet Explorer 6.

Although most people have moved on, I can definitely think of some pretty large clients who have resisted the urge to upgrade.

While writing this post, I also got an email from Salesforce.com detailing their plans to remove support for IE6.  They list the following reasons below which I thought were entertaining. 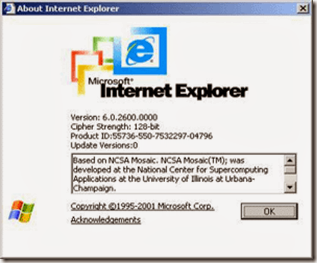 There are several reasons we {Salesforce.com} are ending support for IE6:

•  IE6 is less secure.  Multiple security vulnerabilities in IE6 have been exploited over the years.  The most recent attacks against Google, Yahoo, and other companies specifically targeted vulnerabilities easily accessible in IE6 but much more difficult to exploit in IE7 and IE8—leading the Microsoft Security Response Center to recommend that users of IE6 upgrade to a newer version of Internet Explorer.

• IE6 is slow.  Of all of our supported browsers, IE6 provides the slowest and least rewarding user experience for our customers.

•  IE6 is a “last generation” browser.  IE6 was first released in August 2001.  As an obsolete, non-standard platform, IE6 is a difficult browser on which to develop and support the rich internet applications our customers have come to expect.