BYOC – Bring your Own Computer. 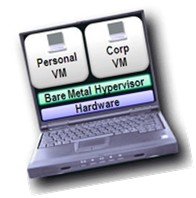 So apparently this actually IS the year of the desktop! 🙂  Forget about when you heard it last year or the year before.  This is REALLY it.. Or maybe next  year. 🙂   In any event, Citrix and VMware have both had plans for a bare metal Client Hypervisor for a while now and with Citrix’s Synergy announcement, they are now the first to actually release it.  XenClient was announced and a public release candidate of it is available for download on Citrix.com.  VMware had also announced plans a while back for its own CVP (Client Virtualization Platform) but has not released anything to the public yet.  VMware has had offline experimental support for VDI though leveraging it’s VMware Workstation application for a while now.

The basic idea behind these client hypervisors are to give users the option of running a secure corporate image alongside a not so secure personal image. 🙂 This choice of personal and work images is suppose to allow companies to blindly encourage employees to purchase whatever hardware they like so long as they can run the client hypervisor.  From there, the corporate image will get pushed down and the user can do whatever they like on the personal image without putting corporate assets at risk.  Sounds good I guess but I am not sure I am sold on the hypervisor aspect of it.  My work and personal life are so blended at times (from an application and daily workflow standpoint) that booting to and from different images would be an incredible loss of productivity. Inevitably, I would begin to break the basic rules of having the two distinct images by merging applications and functions to whichever one would gravitate to become the dominant image in my life.  This of course would put support and security back to the same state as when I had just one image on my laptop.  So I’m just not sure it would work for me personally.

Offline desktop access might just be a red herring anyway since almost everything is becoming blanketed in WiFi.  Planes, Trains and Automobiles are just becoming moving hotspots.  These spots were the traditional barriers for mobile professionals to relinquish their data.  ‘How do I access my Hosted Desktop/App/Doc while on a plane?’  That question is quickly becoming irreverent.  Assuming latency and performance will be overcome, why not just access it all remotely from whatever device you happen to have in your hands at the moment.  iPad, NetBook, Laptop, Kiosk, Phone, whatever.  Although Citrix was first to release the XenClient, I think they had the right message all along.

For me, Access Anytime, Anywhere, Any device was on the money.

TAGS VMwareCitrixClient HyperVisorSynergyVDIWorkstation
NEWER POSTSo have you played with Microsoft’s SCVMM yet?
OLDER POSTHow to remove CRR or CDP in RecoverPoint