So have you played with Microsoft’s SCVMM yet?

While working internally on some System Center configurations, Aaron Silber sent over a quick note on what he was up to.  I personally haven’t played around with System Center or Virtual Machine Manager very much and figure I am not alone so I was glad Aaron found the time to send this over to me.  Internally we are running our critical systems on VMware and Aaron has demonstrated some of the integration possibilities of System Center by bridging the VMware world to the Microsoft World so most things, like vMotion, on the VMware side can be managed from System Center.

In his email, Aaron is quick to state that “One of the cool things about the Microsoft suite is the level of integration between the products, so as an example, VMM manages all things virtual and by connecting the Operations Manager piece, all things virtual that VMM sees, Operations Manager can now see and monitor; this extends to the VMware side of things as well. Operations Manager can be configured to report back on all sorts of issues down to a very low level and even to automatically act upon the issues it finds. As an example, I just received the following alert: 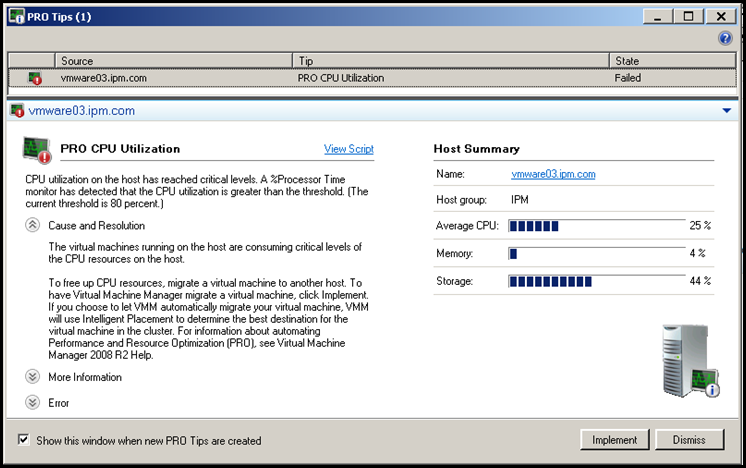 So you can see that Operations Manager is reaching out and reporting back that our VMware server has been hitting 80% utilization on enough of a regular basis to cause an alarm to go off. A basic system action would allow the system to initiate Live Migrations or vMotions of the VM’s to free up CPU on the struggling host.”

In this particular example, System Center could be configured to perform DRS like activities on the VMware infrastructure while only being licensed for regular vMotion.  Companies may begin to start debating Good vs. Good Enough.

If you would like to check out some of the features for yourself, Microsoft has released a slew of preconfigured VHDs with evaluation software that is perfect for lab testing.  Prepackaging the VHDs and making them available for download makes it super easy to begin testing these applications.