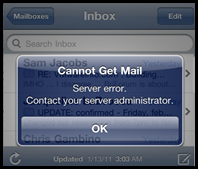 Sounds like a good April Fools joke but it’s only January.

I think outsourcing parts of an environment to the cloud might have this effect on some companies.  I’ve recently moved my mailbox to Microsoft’s BPOS environment and as I wrote, I’ve been very enthusiastic about it.  In a small environment where upgrading, maintaining and releasing new features can become a time consuming event that often get prioritized to the background, a managed service like this works out great.  Instantly after moving to the cloud, I was running with the latest Exchange server fully integrated with Instant Messaging, SharePoint and Conferencing.  For some shops, that can be a real win.

While features and upgrades might have been prioritized down the list, outages and issues shoot straight to the top of that same priority list.  Unfortunately, when the servers are sitting in a far away datacenter that you have no actual access to, troubleshooting can become a frustrating exercise.  In a multitenant environment like the BPOS cloud, an issue affecting a couple of users on a server of hundreds or thousands might not be a top Microsoft priority even if one of those users happen to be YOUR boss.  To me, that is one of the disconnects.  Had that server been in MY datacenter, I could drop whatever I needed and begin to troubleshoot the issue threatening to affect my career but in a public cloud environment, I’m relegated to sending pleading emails to tech support.  Hopefully I can use enough bolding and italics to stress the importance of the situation to them.  I can now fully empathize with those poor users.

While I think everyone should be virtualizing and consolidating within their datacenter (building their own private cloud), I’m not sure public cloud offerings will be as well received as virtualization is.