If you are familiar with VMware’s style of networking, with their port groups, vSwitches and native teaming, then Hyper-V’s networking might be a little intimidating.  Not that you can’t accomplish everything you need with Hyper-V networking, you just need to know where to find everything.
The differences between networking within VMware and Microsoft seem to boil down to approach.  VMware made the decision to handle most of the main networking functions from within the hypervisor or it’s own management software while Microsoft elected to rely on third party players and their individual software.  This distinction can lead someone who is familiar with VMware to see the Microsoft solution as convoluted or confusing while Microsoft loyalists will underscore the potential performance benefits and wider compatibility.  Whatever your take, here are some of the basics of Microsoft Hyper-V networking.
Teaming
All the teaming in VMware is handled by vSphere.  NICs on a physical host are just added to vSwitches and *poof*, Teamed. 🙂

On Hyper-V, you would leverage the Network Card manufacturer’s native Windows tools to accomplish NIC teaming.

Depending on the manufacturer; the software features, functionality and of course Management interface will vary.
In this example, The HP Network Configuration Utility is provided to create teams across both HP ONboard NICs and the additional quad port card.  Make sure you are running the latest management software and drivers and read the release notes for any known Hyper-V issues.
For HP, this is also where you could create additional VLAN configurations (under the VLAN[802.1Q]) button.

Once the NICs are teamed, you will see an additional NIC presented to your Windows OS.  This is typical for Windows teaming software.  This new ‘Teamed’ NIC is what you will reference in Hyper-V.  Unfortunately, the network connections page on your hosts can get a bit crammed and confusing.  I do wish Hyper-V or the Teaming Software would hide connections that are part of a team to make the interface a bit easier to digest. 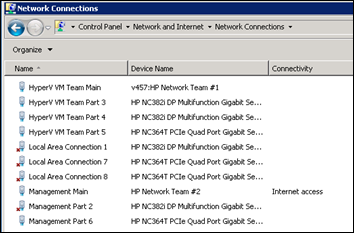 At this point, with the Teamed NIC created, you can now assign it to a ‘vSwitch’ in Hyper-V.

So in Hyper-V, you get the same net effect as long as you know where to look.  While VMware admins might find these steps cumbersome, if you have been building out physical Windows servers, most of this should seem pretty familiar.