Messing around the new VMware Update Manager and I noticed this little piece of information.  Update Manager 5.0 does not support VM patching.  Prior versions of Update Manager used to allow you to update Virtual Machines with Microsoft or Linux patching.  I don’t think many people used this feature so I doubt it will be missed much (or at all).  I used to use it in the home lab to patch my ‘golden images’ and keep them up to date.  Since Update Manager was fully virtualization aware, it had a unique feature that would allow it to power up VMs and patch them off the network.  This worked out great for keeping those VM templates up to date since they were mostly powered off and inaccessible by traditional tools like Microsoft WSUS or System Center Configuration Manager.  Saved some time when deploying an older image. 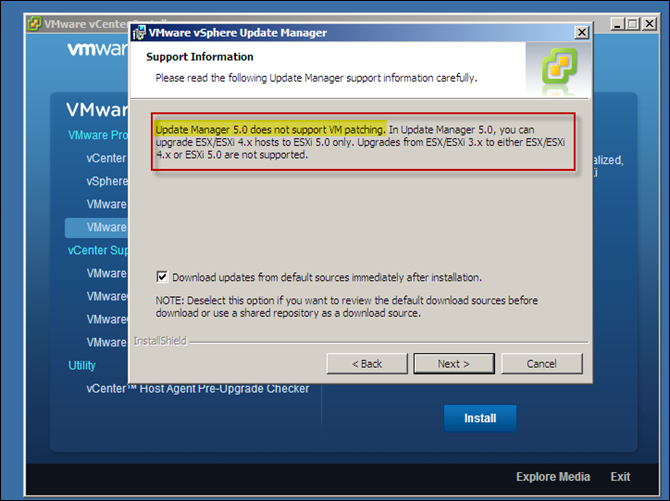 Of course, Host patching is still in full gear and Update Manager is by far the easiest way to keep your ESX hosts up to date.  It is really a well made piece of software that works practically flawlessly for me.  If you are not running it, you are definitely missing out.  I’m actually very pleased to see them remove some of the lesser known/used features and focus in on the core needs of Virtualization Administrators.

They haven’t gotten rid of the VM baseline tab though.  It’s now used to create Tools, Hardware and Virtual Appliance upgrade baselines.  I’m looking forward to diving into this at a later date.