Why I am returning my AppleTV.

I love my Apple products. I absolutely fell in love with the iPhone and think the iPad is a game changer. From a customer service perspective, there are few companies that are even in their league. My experiences with Apple have been so filled with ‘great’ that my recent purchase of AppleTV was a real shock.

After doing my research on which streaming box to put in the living room, it came down to AppleTV and Boxee Box (sorry GoogleTV). I primarily had just wanted a new box to leverage Netflix movie streaming and the occasional locally stored movie. The Wii was just not cutting it anymore. Pandora through the surround sound system was also something everyone was looking forward to.

We already had a handful of iOS devices in the house so I thought the AppleTV would be a great addition. From the commercials, thumbing through things on the iPad and then flicking them up to the big screen was going to be awesome.

Fast forward a week and the ATV is back in the box and heading back to the store.
Here are my reasons in no particular order:

2) No HDMI cable. Really? Bring the thing home only to realize that they don’t include an HDMI cable. It ONLY supports HDMI out so why not toss a cable in. Very surprising.

3) No way to really customize the interface screen. I’m not talking about skins, themes or crazy hacks. Just give me a way to remove all the iTunes Store content(read: advertisements) so my kids aren’t asking every five minutes if they can download Rio the Movie for $4.99 a pop. Sure, parental controls can prevent them from actually buying it, but I want to remove the temptation altogether and the associated continual repetitive pleas. 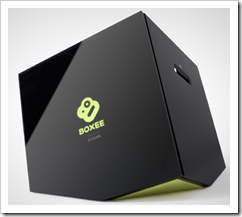 So I went with the Boxee Box [weird shape and all]. Although they were smart enough to bundle an HDMI cable, it was not as plug and play as the AppleTV. Boxee includes a lot of customization options and it took a while to go through them all. Once done though, I was really able to control the type of content that appeared on the home screen. This was a huge plus for me. Of course Pandora, Netflix and a ton of other apps were available as well.

What about the other iOS devices in the house you ask? This one surprised me. Boxee supports AirPlay without any issue! From the iPad, Boxee shows up as a display device that I can then send content to. Very slick and it actually felt faster than Apple’s implementation.

There are of course issues common with both devices (Hulu support anyone?) but overall, I felt the the D-link Boxee Box was a stronger device for my household.