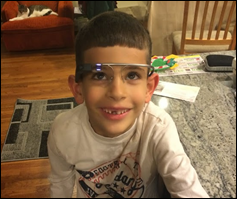 So I ended up getting a Glass invitation in my inbox last month.  I had signed up to become part of the Google Glass explorer program a while back and finally got the chance to purchase them.  I was super excited.  Super excited to jump on the wearable technology wave.  I went ahead with the purchase  and had them on my head a couple of days later.  The initial excitement of getting the Glass invite for a gadget guy like me was instant.  I thought the initial email from Google was pretty funny though.  I had 7 days to decide if I wanted to purchase the Glass before the invitation was revoked.  Although it probably wasn’t, it really felt like a hard sell. 🙂

After sporting them for about 20 days (well within the 30 day full refund limit), here are some of the reasons I decided to return Glass to Google.

#IOS
At the time, there was no dedicated IOS application for Glass.  This basically meant all WiFi connections had to be set up on the Glass Website/Dashboard via a computer in order for Glass to connect with the appropriate WiFi Passwords, etc..  In addition, GPS and Text Messaging were not available to me.  After returning Glass, Google did release an IOS companion app to address these shortcomings but my testing phase had already been soured. 🙁

#ATT
Another huge problem for me was my AT&T data plan.  I am currently grandfathered into an unlimited data plan.  Any changes to my plan would basically toss me into a tiered data plan again.  I currently CRUSH my data plan so going back to paying for actual GBs is not in the realm of possibilities for me.  Adding tethering to my plan would be one of those changes that would trigger the tiered plan.  As a result, I could not tether my Glass to my iPhone.  This SEVERLY limited what I could do outside of the office and home.  With no internet, Glass became a really lightweight head mounted camera.  Cool but not enough for the amount of cash required to participate.

#COST
Glass costs a bundle for a Beta product.  One Thousand Seven Hundred Dollars when it’s all said and done!  I feel compelled to spell out the amount.  For my hard earned cash, I need to have a more polished consumer ready product.   I think for the proposed $300 – $500, it will be very compelling when evaluating value vs. cost.

#BatteryLife
I was not crazy about the battery life. I only got a couple of hours out of it.  I am already fighting a constant battle with my iPhone to eek out a day’s worth of juice and the prospect of having to deal with another power hungry device wasn’t too appealing for me.

#Apps
I have a TON of useful apps on my iPhone.  I love purpose built apps which give me the information I need without forcing me to go visit websites.  While I was testing, Glass didn’t have a lot of those.  Google Now is awesome but without a steady internet connection (#ATT), it really didn’t wow me.  I am sure new apps will be released which will be awesome but at this time, it’s not enough for me.

#Glasshole
I had heard the term Glasshole before jumping into the Explorer program.  It’s the “affectionate” term used for people who walk around all the time wearing their Glass.  Very similar to BlueDouche (for the bluetooth wearers).  I knew I would look like a Glasshole but figured that Glass would be so indispensible that I wouldn’t care.  Turns out I cared! … and because Glass turned out to not really be that indispensable to me, it bothered me.  It was cool and all but not enough for me to get over the stares, comments and social awkwardness.  Granted, some of that could have existed previously but with the headgear attached, I was hyper-aware.

All in all, I was REALLY glad to have participated (even briefly) in the Google Glass Explorer Program and really hope a lot of these issues get resolved.  I’m on the fence as to whether it will ever take off completely in its current form but no doubt some type of wearable will make it to our faces.