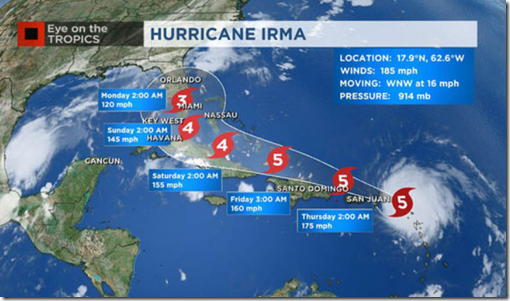 Florida is a great place.  I love living here but every so often, between September and November, it gets a bit intense.  This past week, #Irma rolled through the state.  It came fast and furious and was pretty unpredictable (at least to me).   We prepped the best we could and waited.   From a Smart Home perspective, it hit in 3 phases.

The first was the initial bad weather that rolled through.  I had some automations already set up related to the extreme weather.  Some examples were shutting the Rachio sprinklers if the winds measured higher than 15 mph.  In general, those high winds would make the sprinklers less effective and to prep for the hurricane, we issued a 5 day rain delay on the controllers to help dry up the ground to soak up the anticipated rains.  Another automation checked wind speed and flashed the lights in the house if winds reached 50 MPH to notify us to be on alert and possibly get into our safe room.  The system also verified that all windows, doors and garage doors were not open and would have alerted us via TTS if they were.   Using the Skybell HD was a great way to ‘see’ outside during the actual Hurricane until … 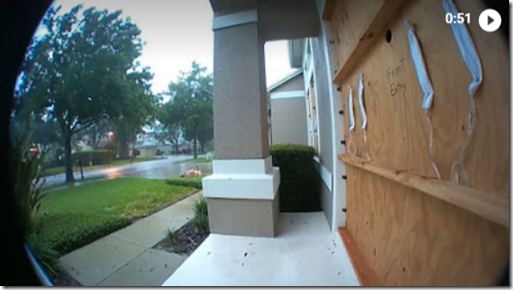 The next phase to hit was the power outage.   An IOT Smart House is pretty crippled when the power goes out.  Some surprisingly helpful exceptions to that were the Nest Protects and the Hue Go Lights!  Irma hit us very late at night and when the power went out in the neighborhood and house, everything was really dark.  Even moon light was not really useful since most of the openings in the house were boarded up with plywood. (Side note – Plylox clips are amazing for putting up boards!)  Once the power went out, as we walked around the house, the Nest Protects kicked in with their pathlight feature.  Since the Nests also have a battery backup, we had amazing ceiling nightlights kicking in as we walked around the house.  I don’t honestly know the battery life on these things but we lost power for almost 6 days and the pathlights worked every night.   We also knew from the pathlight that the Nest protects were still in fire notification mode in the event of a fire, they would still be working.   The Nest thermostats also provided light to us using their internal battery and motion detection.  Walk by one in the living room and it lit up providing some light at night.  Unexpected but awesome side benefit of an already great product.

The Hue Go lights were something that we knew would come in handy.  They charge up and provide a 3 hour battery operated portable light.  We had 2 of them and each one lit up a room on their own.  We did have to scramble a bit to get them charged in the daytime but I used a fully charged APC UPS unit for that.   It worked out great and I’m glad we had them for the hurricane.

The last part of the hurricane experience was power restored but no internet.  Most of the devices came back online pretty quickly when power was restored but almost all of them required at least the local Wifi network to be functional and controllable.  The Alexa echoes were pretty useless without internet. (although they provided a LOUD notification once it came back).  The Wink controlled devices were also pretty useless without internet.   There are some hacks to allow for local control but I haven’t implemented them yet.  This is now on the todo list.   Hue lights worked like a champ but I did have to dig out the app on my phone.  Home Assistant also worked pretty well controlling what it could on an automated basic over the local Wifi.

I’m pretty pleased with the prep we did and the expected results.  No major property damage and no injuries.  It was somewhere between a Category 1 and 2 when it hit us.   For next time, we are hoping to have some solar panels and a Tesla PowerWall to keep us afloat for the outage.  We’ll have to see how all that works out.

Be sure to check out the rest of my #IOT posts by clicking the hashtag link.