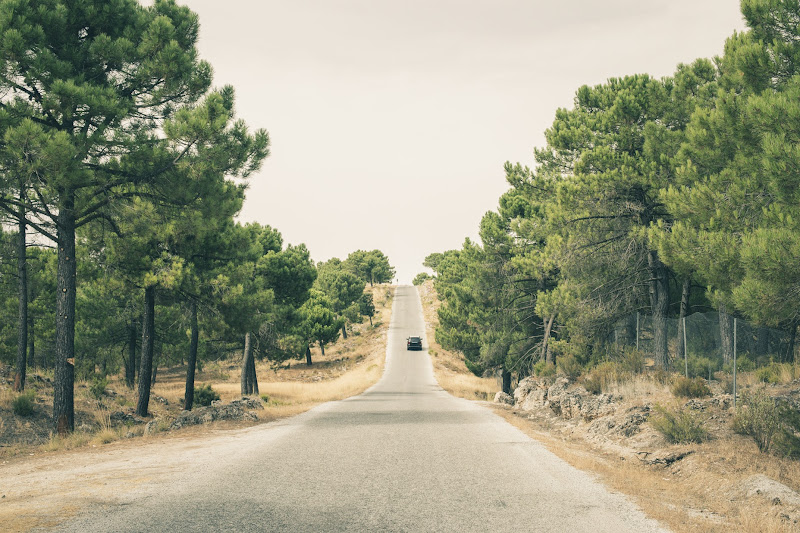 Last week I headed out to Atlanta Georgia to go to a partner only event from VMware called VMware EMPower.  This is a technical event similar to a mini VMworld.  Breakout classes, certification courses and a solutions expo.  This year it was held at the CNN Center at the Omni Atlanta Hotel.  I don’t fly much so since I live in Florida, I decided to take the opportunity to rent out a Tesla Model S and take Autopilot for a nice 10 hour test drive!

First step was to rent a Tesla Model S from the Turo site.  If you have never used this site before, it’s kind of like an AirBnB for renting cars.  You can rent local cars from local individuals for cheaper rates than the big box retailers in some cases or get a unique car that might not be available from your standard enterprise/hertz etc.. Since you are dealing with individual owners, you can also work out times and locations that are more convenient sometimes.  For me, I was able to rent a 2014 Black Tesla Model S.  Since the journey from Florida to Georgia was going to be about 450 miles, having the safety and convenience of Autopilot for the trip was key.  I originally wanted to take my Chevy Bolt EV but due to the distance and lack of J Chargers, Tesla was the only way to get there reliably.  The Tesla Supercharger network had locations all along the I-75 interstate.  This trip had me stopping about 4 times for charging adding about 2 hours to my total trip time (from 6.5 hours straight to about 9 hours with stops and charging).  This was perfect since I was able to drive for about 2 hours each leg before stopping, recharging, grabbing some munchies and stretching my legs a bit.

It was that stretch between Gainesville and Mercer that was about 200 miles and just had a single non-tesla charger that prevented me from taking my Bolt for the trip.   Although the Bolt can easily get 200 miles on a full charge, it would have been a risky move if the single charger midway had been occupied, down, broken or otherwise unavailable to me.  Having that Supercharger network is a real game changer for long haul trips.  The other 90% of the time when it’s local to local driving, the Bolt is super fine.  The other nice deal with the Tesla was all of the Supercharging was free and there was no additional gas expenses for the long drive.

So as excited as I was to go to the VMware conference, I was pumped to get to really spend some quality time with the Tesla Autopilot. 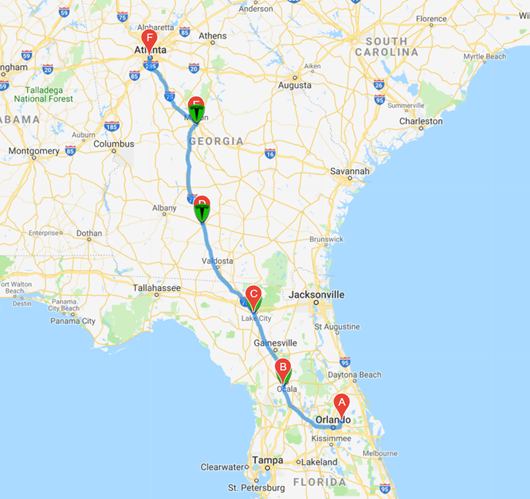 So here are the trip details for my long haul trip from Orlando to Atlanta:  (The way back was pretty much identical but in reverse) 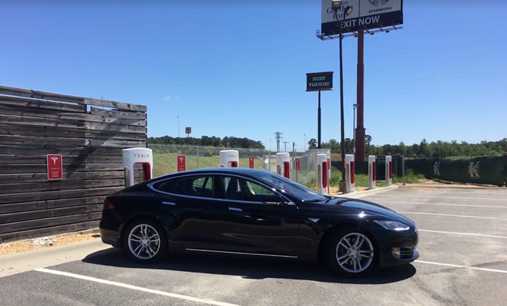 5th and Final Stop IN Atlanta,GA was @ 6:35pm (This one wasn’t REALLY needed except I didn’t have a place to charge at the hotel).

So all in all, the drive up to ATL from Orlando took me about 10 hours start to finish.  I think normal driving in a gas car would have probably taken me about 8 or 9 hours.  Some of the chargers were in weird places that were fine for me to stop at and charge but had I been with my family, it would have been a struggle to keep occupied for the 30 minute charge sessions.  There are only so many Taco Bells and Starbucks that you can use to pass the time with a family.
Supercharging was amazing though.  Every location had at least 8 Stalls to charge and I only ever saw a max of 2 others in use at any time over the two days.   So I never had to wait or anything.  And charging was FAST!  Up to 350 Miles per hour were being put back into the battery when first pulling up on an empty battery.. So in less than 30 minutes, the car was easily at 150 miles again.   Really amazing stuff.

Side note: The experience with Turo for renting the car was amazing.  I dealt with the owner of the car who was super nice and accommodating throughout the rental period.  Explaining the various options on the car and making sure the car was fully charged and washed before I picked it up.  I was even able to use the car’s SunPass for all tolls (to be reimbursed but a tremendous time saver)  I would definitely do that again and if you are in Orlando looking for a Tesla, I’d recommend Bradley’s Car.

Back to the Tesla, Autopilot is a game changer for me.  Lots of luxury cars have versions of it (lane assist and adaptive cruise control) but this Tesla seemed to have nailed it.  The car was always dead center in the lane even when auto-steering through curves and uneven roads yet was smart enough to move off center when side cars came in too close for comfort.  Once they had moved on or behind, the car would return back to center of lane.  Once on the highways, I really did feel like a passive driver or active passenger in the car.  Driving a car for 10+ hours would normally have me drained and tired but the autopilot features and assistance really allowed me to stay quite refreshed.  The drive definitely wasn’t as physically draining as it should have been had it been a normal car.

I have wanted a Tesla prior to this experience but now with the real hands on driving, I 100% see myself purchasing either a used S or a Model 3 once the production ramps up.

If you are in the market for a new Tesla, you can use the link here (https://ts.la/giancarlo3622) to get free supercharging and $500 credit.