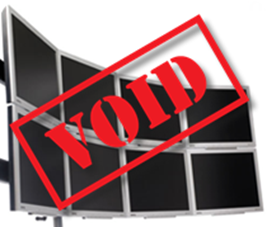 For a while now, we have been recommending using XenDesktop for users to get back to their Physical Desktops back in the office as a type of localized GoToMyPC.  The solution was especially appealing to existing XenApp customers that were publishing RDP session on their XenApp farms as a way of providing secured access to user’s PCs.  RDP over ICA provided it’s own challenges (video, sounds etc.) so ICA all the way back to the Physical Desktops was a winner.  As long as they were using XP.  Recently, I tried to implement this solution for a client that was running Windows 7 on their desktops.  A typical workstation with a couple of monitors and Windows 7 OS.

Not the typical success story that I had grown accustomed to with the XP machines.  After installing Citrix’s HDX-3D package and VDA, we were able to connect over to the PCs.  Two basic issues presented themselves immediately.  The most severe and apparent was the mouse control/location.  The icon was several inches offset from were the actual click was taking place.  The other issue was the inability of the VDA to ‘Blank’ out the remaining monitors.  It only blanked the initial monitor that it was relaying the screen for.  Remaining monitors were unlocked and visible to people within the office. This would have presented privacy issues within the organization if we had been able to overcome the mouse issue.

After a couple of weeks of Citrix troubleshooting and escalations, the case was closed without resolution.  Citrix Development is aware of the issue and is hoping that it will be addressed by the next version of the HDX-3D package.  Due to the nature of development, no ETA can be provided.  Definitely not the answer my client or I was hoping for.  It is what it is though.

Bottom Line: Using XenDesktop 4.x with a Windows 7 physical machine with more than 1 monitor is not supported and probably will not work.

I wish this was better documented somewhere on Citrix’s site before I recommended it.  Maybe a KB article or in a release note somewhere.

Would another Broker solution have fared better in this particular scenario?  Let me know in the comments.  Thanks.